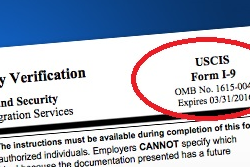 Form I-9 requirements were established in November 1986 when Congress passed the Immigration Reform and Control Act (IRCA). IRCA prohibits employers from hiring people, including U.S. citizens, for employment in the United States without verifying their identity and employment authorization on Form I-9. On November 14, 2016, USCIS announced the release of a revised version of Form I-9.

By Jan. 22, 2017, employers must use only the new version, dated 11/14/2016. Until then, they can continue to use the version dated 03/08/2013 or the new version.  On a related note, the publisher of HR Actions, an add-on that provides paperless forms for Sage HRMS, announced that their electronic form would be updated in the Q1 2017 release of HR Actions.  The update will be released in mid-January so that the forms will be updated for the January 22nd deadline.

Changes to the Form

Among the changes in the new version, Section 1 asks for “other last names used” rather than “other names used,” and streamlines certification for certain foreign nationals.

The addition of prompts to ensure information is entered correctly.

The ability to enter multiple preparers and translators.

A dedicated area for including additional information rather than having to add it in the margins.

A supplemental page for the preparer/translator.

The instructions have been separated from the form, in line with other USCIS forms, and include specific instructions for completing each field.

The revised Form I-9 is also easier to complete on a computer. Enhancements include drop-down lists and calendars for filling in dates, on-screen instructions for each field, easy access to the full instructions, and an option to clear the form and start over. When the employer prints the completed form, a quick response (QR) code is automatically generated, which can be read by most QR readers.

While the new form contains pop-up informational icons and error-checking capabilities, it should be emphasized that this is NOT an “electronic” I-9, it still must be printed, physically signed and dated by the employee and the employer representative and retained per the established rules.

To download the new Form I-9, Employment Eligibility Verification, instructions or supplements for Preparer\Translators click form name above. To more easily complete USCIS suggests you download the PDF directly to your local computer. For best results, ensure that you use the most current version of the browser of your choice.  While the most up-to-date instructions are located on the form, USCIS plans to update the Employer Handbook soon.

For more information on I-9 and other compliance reporting with Sage HRMS and HR Actions, contact your Net at Work Account Manager or visit www.netatwork.com

Informative Webinars
Should I Migrate to the SQL Sage HRMS Version?
Electronic Onboarding: How to Go Paperless With Your Hiring Process
InfinityHR – Complete HR Automation Has Never Been More Within Your Reach!
Fast & Focused Live Webinar: Editing W-2s and 1095’s