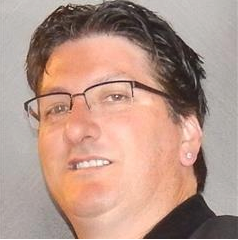 Dan Fahey is a Senior Business Analyst and Certified Sage Consultant with Net at Work. He has worked with the Best/Sage HRMS software platform for the last 20 years in various roles including a Senior SME at Sage while helping to launch multiple new offerings and them applying that knowledge to help manage 100’s of client implementations as a consultant.

His goal is to take that knowledge and provide it to Net at Work clients to give them the personal attention they deserve to allow them to fully utilize the Sage HRMS software that helps to run their small or global business.

When not solving problems in the HRMS world Dan loves travelling with his family around the world, managing his son’s baseball team, helping out with his daughter’s cheering practices and with all of that he still finds time to play and record his own music as well.

What is the most important characteristic for a consultant?

What has been your best experience as a consultant?

Dan told me about a client that he worked with over several years assisting with their Open Enrollment. Last year, they ventured out and did the whole Open Enrollment process on their own.  When Dan checked in on them at the end of the process, he said he felt proud to think that all of his work had borne fruit in the client’s self-confidence. “It was great to hear her feeling of accomplishment.”, he told me, “And we both laughed about it this year when she called me to ‘check in’.”

What would clients be surprised to learn about you?

For many years, Dan worked in hospitality, culminating in a two-year stint as a sous chef for a country club. One thing that struck Dan later was how opposite working as a chef was from his work today – going from a good sharp knife to complex SQL queries. However, there were many similarities.

“Working under a deadline with big events taught me to be able to deliver under pressure.”, Dan said, “Nobody wants the food to be bad at their wedding or an All-Star banquet.  In that way, it was not all that different from a Payroll go-live.”

“I have young kids, what’s a bucket list?” Dan replied.  Then he revealed that he made a pact of sorts with his son, who recently enlisted in the Navy.  “Each year he serves, we agreed that I could pick out a tattoo for him and he would pick out one for me – no refusals allowed.”, he said.  Now that’s trust!