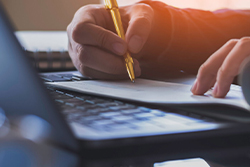 Certainly, one of the biggest news stories on the payroll front was the tax reform bill signed into law on December 22nd.  The IRS has issued new withholding tables and instructed employers and payroll software providers like Sage to implement the new tax tables by February 15, 2018.  However, there were other changes to earnings, deductions and taxes of which employees and employers should be aware.

Although there were no changes at the Federal level, minimum wage earners will see changes at the state level.  Eighteen states (Alaska, Arizona, California, Colorado, Florida, Hawaii, Maine, Maryland, Michigan, Minnesota, Missouri, Montana, New Jersey, New York, Ohio, Rhode Island, Vermont, Washington) and the District of Columbia will see minimum wage increases in 2018.  In many cases, employers will also increase wages across the board to deal with wage compression as new employees come in at higher starting wages.

The Federal Family Medical Leave Act (FMLA) requires unpaid time off for family and medical leave reasons.  In 2018 New York joins three other states – California, New Jersey and Rhode Island- that currently require paid family and medical leave. All four of these states fund their programs via employee-paid payroll taxes and administer the programs through their disability programs.

Paid Sick Leave is required by six states and the District of Columbia, with Rhode Island (7/1/18) and Washington (01/01/18) joining them this year.  Paid sick leave is typically accrued based on hours worked. Connecticut is a typical example: employees accrue 1 hour of sick leave for every 40 hours worked, up to an annual maximum of 40 hours per year.

As such, paid leaves do not add to employees’ gross wages, but they do reduce the need for unpaid time off.  In most cases, the hours can be ‘banked’ and carried over into subsequent years of employment.

Pre-tax deductions from employee pay can still be made on a pre-tax basis up to $260/month for Parking/Transit Passes/Van pool.  The pre-tax deduction of $20/month for bicycle commuters has been eliminated.  If employers pay any reimbursements for any these expenses, however, it will now be considered taxable income.

Benefit Costs – Health benefit costs are expected to increase 4.3 % in 2018. This is the highest increase since the 6.2% increase recorded in 2011, according to a recent Mercer study reported by SHRM.  Employers will look for ways to reduce costs or pass them along to employees, such as offering lower-cost, high-deductible health plans.  Other benefit premiums are expected to follow suit, increasing employer’s total compensation per employee.

Flexible Spending Account (FSA) – All FSA contribution limits have increased (Medical-$2650|Adoption Assistance-$13,840) with the exception of Dependent Care, which continues to stay at $5000 ($2500 if married filing separately).

As mentioned above, Federal Income tax rates are slated to change no later than February 15th. Look for a Service Release from Sage for your Payroll modules in the next few weeks.  It is important for employers to install the Service Release prior to processing their mid-February payroll.   The new withholding tables are designed to work with the Forms W-4 that workers have already filed with their employers to claim withholding allowances. This will minimize burden on taxpayers and employers. Employees do not have to do anything at this time.

The IRS expects to have an updated W-4 form available soon. In the meantime, employees should use the current W-4 form to calculate their withholdings. Once the new rate tables have been adopted and are in use, employers will want to recommend that employees look carefully at their tax withholdings and make appropriate adjustment to their exemptions and filing status on a W-4 form. The IRS plans to revise the tax calculator on IRS.gov by the end of February with the changes. Employees can use the revised calculator to determine the appropriate level of withholding so that they do not withhold too much or too little.

For a complete picture of tax changes, employers should check their State and local tax websites and refer to their Sage product release notes.  For more information on implementing any changes to your payroll system, contact your Net@work Account Manager to arrange for consulting with our professional services staff.