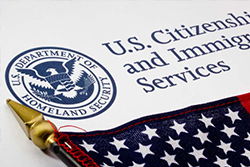 Beginning January 22, 2017, employers are now required to use a new version of Form I-9 to verify the identity and employment authorization of their workforce. The new version includes a number of substantive changes, as well as “smart” features, which U.S. Citizenship and Immigration Services (USCIS) believes will make it easier for employers who want to complete the form on a computer.

Established by the Immigration Reform and Control Act of 1984 (IRCA), the Form I-9 must be completed by all employees, both citizens and non-citizens, to attest to their employment authorization. Employers are not required to complete I-9 forms for unpaid volunteers or contractors. Failing to complete and retain a Form I-9 for each employee may subject an employer to civil fines, criminal penalties and debarment from government contracts.

Employers had to cease use of the current I-9 form, first implemented in 2013, by January 21, 2017. After that date, employers must use the updated version which contains several fairly significant departures from previous iterations of the form.

The new version of the Form I-9 includes some clarifications as well as some changes designed to make the form easier to fill out electronically. Completing the Form I-9 electronically will require downloading the latest version of Adobe Reader. Form I-9s completed electronically will still need to be printed and signed by the employee and employer agent by hand. One of the changes is in Section 1 which now asks for “other last names used” rather than “other names used.”

Enhancements for easier completion of the form include drop-down lists and calendars for entering dates, the addition of prompts to help ensure that information is entered properly, on-screen instructions for each field, and easy access to the full instructions. It also includes an option to clear the form and start over. Other changes you’ll find on the new I-9 include:

Reminder of I-9 Process

As you may know, the 1986 Immigration Reform and Control Act (IRCA), prohibits employers from hiring employees, including U.S. citizens, without first verifying their identity and checking that they have proper authorization to work in the United States. The Form I-9 ensures that you have completed this necessary verification for all new hires. USCIS provides the following useful graphic to show the proper timing and process for completing Form I-9s for each newly hired employee:

For a copy of the form and instructions, go to:   https://www.uscis.gov/i-9